Sony has released four fantastic new High Power home audio systems to power a proper party in 2018. With two options of the “all-in-one box” style; MHC-V71D and MHC-V41D and a “3-box” model MHC-M20D, they will fill any room with booming sounds.

Party in a box

These one-box style High Power Home audio systems spread loud and powerful sounds around the room, thanks to the integrated Spread Sound Generator technology - they will be the centre of your party space! The V71D has LIVE SOUND and psychedelic 360˚party lights that illuminate the room and craft the perfect atmosphere. The gesture control feature lets you be the DJ, sothere’s no need to leave your living room as they bring all the essentials of a club to you.

The new TAIKO mode on the V71D, as the name suggests in Japanese, allows you to use your High Power Audio one-box system like a drum. Add your own twist to your favourite songs, by tapping the touch panel to enjoy a variety of drum samplers. You can also use the gesture control feature to enjoy a variety of virtual instrument samplers, by swiping over the top of the device. TAIKO can also be a game, whereby you tap to the rhythm and compete with your friends for the highest score.

Fun features to impress your friends

The V71D and V41D have the ability to bring people together with their unique interactive features that get everyone involved. Why not let your social media network know that you’re having a big night with the “Party King” feature? With the accompanying “Fiestable” app, you can easily show off these home audio systems thanks to the new social posting button.

Alongside this you can get certified as a Party King and enter the party ranking. The more you party, the higher your ranking! Your achievements can even unlock special samplers.

Connect sound as well as friends, with the Wireless Party Chain feature which can now connect up to 50compatible systems together. You can also use multi-device connectivity so the power of the DJ can be passed around by connecting several smartphones to the speaker, so different partygoers can put on their favourite song easily.

Three is definitely not a crowd with the M20D

Sony has also developed a new 3-box model with the introduction of the M20D. The speakers achieve an impressive and improved level of sound pressure, with a high power amplifier which will liven up any event.

Finally, enjoy your music from any source, with CD, DVD, USB, Bluetooth, mic & guitar inputs – and HDMI OUT (ARC), to enhance your entertainment with a screen! 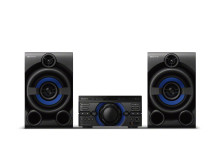 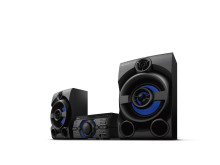 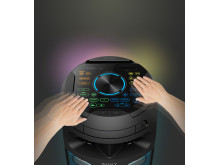 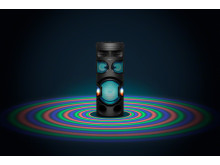 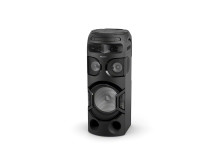 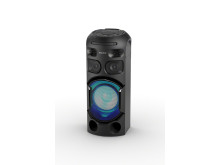 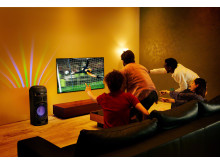 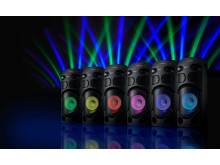