Sony turns signatures into music to show off Multi-room speakers

as part of a series of Sonic Wonderland sound experiments

Bompas & Parr has worked with Sony to turn signatures into a unique set of notes – creating a piece of music that is, quite literally, their own sound identity. The technology featured in the ‘Sony Sonic Wonderland’, where a series of sound experiments were created to showcase the brand’s range of Multi-room audio products.

As part of the experiment, signatures were converted into an audio form. The autographs were passed through a complex set of algorithms which analysed 47 different dimensions – including pressures, size, speed, character formation and distinction – to create a unique set of notes which are played out on Sony’s SRS-X88 Multi-room wireless speaker.

Each guest was able to broadcast a truly unique musical hallmark which varies in both pitch and time. In fact, due to the superior sensitivity of the human ear, these sonic signatures may carry more distinction than the original drawing.

To see this for yourself: http://we.tl/TAlvE82CH1

Research into a variety of different ‘signature sounds’ found that longer, looping signatures will create deeper sets of notes, taking advantage of the great frequency range of the SRS-X99 Multi-room speakers, from the lowest bass to the highest harmonics in pure High-Resolution Audio. At the other end of the scale, shorter, scratchier signatures tended to result in higher notes and an overall faster piece of music.

The ‘Signature Tune’ machine was showcased at the Sony’s Multi-room Sonic Wonderland in partnership with culinary designers Bompas & Parr. The space explored the effect of sound and how, through a series of sonic experiments, senses can be mixed to create new experiences.

These included visualising music using “a cymatic bath” of coloured drinks, growing plants that make an audible gasp when picked and eaten and mixing sonically infused cocktails “flavoured” with different forms of music.

Sam from Bompas of Bompas & Parr said, “We all know that changing the music in a room changes the mood. So when Sony approached us with the idea of using their speakers to create the Multi-room Sonic Wonderland, we wanted to explore how much our perception of sound can influence our other senses.”

“We’ve been able to use the sense of sound and sight to alter the public’s perceptions of taste, completely changing their experience. In just the same way, translating the touch of a pen on paper into sound, we’ve been able to explore the way something very personal – a signature – can be translated into a public performance using Sony’s audio technology.”

Sony has recently launched its Multi-room audio technology, which means you can create the right environment by listening to the right music, anywhere and at any time – connect compatible devices and enjoy multi-room music in any room of the house.

Sony has a broad offering of Multi-room connecting products and options. From its sleek wireless speaker range, the SRS-X77, SRS-X88 and SRS-X99 to its AV Receivers STR-DN860 and STR-DN1080, to the Soundbars HT-NT3 and HT-ST9, Hi-Fi System CMT-SX7 and SoundBase HT-XT3, Sony range offers the perfect sound system for everyone and every situation. Music can be easily streamed onto devices via Google Cast or other supported services via Bluetooth /NFC One Touch.

Bompas & Parr leads in flavour-based experience design, culinary research, architectural installations and contemporary food design. Founded by Sam Bompas and Harry Parr in 2007, the early work of the studio used jelly as a vehicle to research the crossmodal correspondences of the senses and the relationship between food and architecture. The studio first came to prominence through its expertise in jelly making, but has since gone on to create immersive flavour based experiences ranging from an inhabitable cloud of gin and tonic, a chocolate climbing wall and a Taste Experience for the Guinness Storehouse in Dublin, officially the best place to taste Guinness in the world.

About the Sony Multi-Room products used in this experience

For more detail about all the Sony Multi-Room products listed and in the experiment, please see the Sony press centre: http://presscentre.sony.co.uk/pressreleases/bring-your-music-together-at-home-with-sony-multi-room-1141546 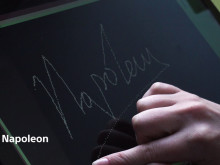