With the use of home technology increasing, and Brits favouring voice assistant devices to act as a ‘sous chef’, to make everyday tasks easier, the cookbook could be taking on more of an online form, according to new research.

Liam Charles is working with Sony to show how easy it is to make technology the centre of the kitchen. Liam created a bespoke Christmas dish, Cheesecake mince pies, which can be searched for online or by using the Sony Smart speaker – the S50G. Liam searches for the recipe using the Smart speaker in a video tutorial, showing how to whip up the dish. Watch here: https://youtu.be/1rSxophp-vw

Liam Charles said: “I’m not going to lie, I can get a bit carried away in the kitchen, experimenting and testing out new flavours and recipes. The Sony Smart speaker worked as an ideal sous chef; not only will it answer my questions but it can play my favourite playlist and can pause when I need a second to concentrate.”

“And, the sound quality is banging so I can hear music and responses over the noise, wherever I am in the kitchen!”

Lucia SestonFerdinand, Sony Sound Product Manager, commented: “The Sony S50G acts as the perfect accompaniment for the kitchen or any room in the house for that matter. The ‘hands free’ element of the speaker enables budding chefs the chance to concentrate on their cooking without having to turn the page or further cluttering up the kitchen. Not only that but the speaker is multi-functional with 360-degree sound; with the sound filling the kitchen like the aromas of dishes created. And, if you happen to spill your dish on the speaker it’s waterproof so can be easily wiped clean.”

The Sony S50G is the perfect piece of kitchen equipment for professional and amateur cooks alike. With its high quality, 360 degree sound, people are able to listen along to music, ask questions and follow recipes from anywhere in the room, hearing the response loud and clear.

Mince pies and gravy are probably the best parts of Christmas for me, for the sake of a sweet bake we’re not going to include gravy but we are going to take the inspiration of a mince pie and knock it into a cheesecake recipe.

For the Shortbread base,

About the LF-S50G Smart Speaker 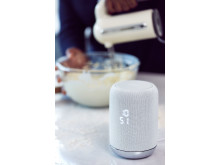 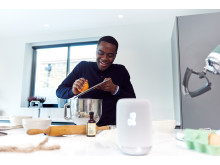 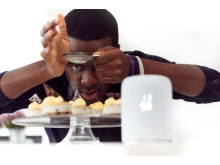 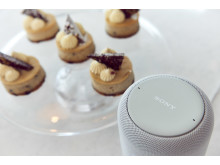 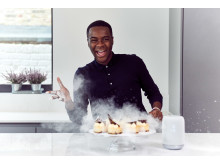