While the ‘9 to 5’ may be a little outdated, a quarter of UK workers clock on at 6pm as everyone else is returning home and continue through the night whilst the rest of us sleep.

Research found that amongst UK workers over 7 million work between the hours of 6pm and 6am, with the most common night-working industries being transport and logistics (52%), followed by entertainment, leisure and hospitality (36%).

To bring to light the efforts of workers who keep the country going 24 hours a day, news photographer David Hedges – awarded Young Photographer of the Year at The Picture Editors’ Guild Awards 2013 – used the Sony α7S to capture a series of low light documentary-style images showcasing this ‘hidden’ UK workforce.

The images depict a range of night workers spanning the length and breadth of the country; including railway engineers in Bristol, guards at Hampton Court Palace and a fruit and vegetable seller at Borough Market.

The images were captured on the Sony α7S - a professional, portable 35mm full frame interchangeable lens camera. The camera is particularly well suited to low-light conditions as it has unrivalled sensitivity (up to ISO 409600), so the amount of light it can collect is dramatically increased compared to conventional cameras.

Photographer David Hedges commented on the capabilities of the Sony α7S, which he used to shoot the images:

“Being a news photographer, you have to be able to capture scenes and moments quickly – and generally the set up and lighting is completely beyond your control. Having a camera which can perform well in low light such as the Sony α7S opens up so many more creative options for the photographer.

“My line of work often requires me to work all hours, many in the dark, and the ISO range on the Sony α7s allows me to get shots which I previously simply could not achieve without adding some lighting. Being able to shoot at ISO 409600, and still get a very usable shot, opens up many creative possibilities." 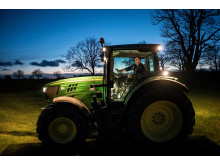 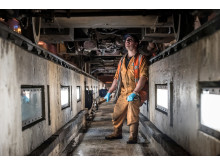 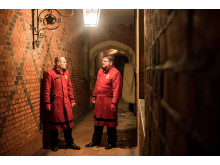