In a fusion of Cymatics experiments, Sony has created a stunning video merging light, colour and sound to showcase the incredible sound pressure and lighting capabilities of its new MHC-V7Dspeaker. The High Powered Audio System is a true party beast that can get anything moving, in the video it uses Cymatics (the visual representation of sound) to make earth, water and paint dance to Kiesza’s chart breaking megahit Hideaway in an effort to visualise its true power.

This incredible Cymatics effect was discovered in 1680 by Robert Hooke and refers to the study of making sound visible, usually through controlled displacement of particles on vibrating plates or membranes. In this experiment the vibrations were created by the powerful sound of Sony’s MHC-V7D.

Alberto Ayala, director of Vision and Sound at Sony Europe, said: “The MHC-V7D marries incredible audio and visual effects including gesture control and LED speakers which create a unique sound experience. The beauty of Cymatics is that it literally creates visuals from the sound pressure of the MHC-V7D and combines audio and visual in a way that means people will see Hideaway in a completely new light, just as if they listened to it through our High Powered Audio systems.”

Working with creative production studio Unit 9’s pioneering Innovation Architect Yifei Chai and his team, Sony’s video takes you to the heart of the MHC-V7D where resonating sand, dancing paint, sonic water sculptures, and ferrofluid are manipulated in visually arresting ways. The video follows a fascinating journey within the MHC-V7D, navigating through the speaker from the moment it’s switched on and taking the viewer as close as possible to the mysterious world of sonics.

In the video the woofer powers various visual effects that are designed to coordinate with the instruments, sound spikes and vocals in Hideaway, and thus mimic the song’s journey from its dark and quiet beginning into the woofer, towards a final visual crescendo which sparks to life the science of sound.

Sonic water sculptures, created using a petri dish filled with vodka and placed on the MHC-V7D’s sub-woofer, translate the invisible track into concentric circles tripling in tandem with the track’s vocal.

The power of the audio is next visualised by a captivating Chladni Plate- a thin metal sheet covered with sand and attached above the speaker – where the beautiful effect of Hideaway’s audio frequencies can be seen manipulating the sand into a series of patterns that visualise the song’s resonance.

Ferrofluid was used to showcase the amazing gesture controls of the MHC-V7D. Containing tiny particles (~10 nm diameter) of a magnetic solid suspended in a liquid medium, ferrofluid has the fluid properties of a liquid and the magnetic properties of a solid. Using electro magnets synced to the beat from Hideaway, the ferrofluid rhythmically distorts into a display of abstract spikes that demonstrate the song’s impressive bass by reacting in time with the music, whilst representing the hands free way you can interact with the MHC-V7D through its gesture controls. The ferrofluid is then illuminated with lights that match the speakers’ adjustable space illuminating party lights that also synchronise with the beat.

Finally, to demonstrate the Smart High Power Technology of the speaker which creates an incredible 1550w sound pressure and soul-shaking bass, a combination of three dancing paints was put directly onto the woofer. As Hideaway plays, the paint is shot in ultra-slow motion as it ‘jumps’ to the rhythm of the track, the colours mixing and globules of paint falling back to visually paint a picture using the power and sound pressure of the MHC-V7D.

Finally, the camera withdraws from the speaker as it powers down from the song.

Unit 9 Director, Cole Paviour,was chosen by Sony for this visual adventurefor his storytelling of psychology through compelling cinematic photography which has shown his leadership in a new generation of digital filmmaking. Speaking about this project the forward thinking artist said: ““It was a real privilege to collaborate with Sony on this project, and a great opportunity to explore and experiment with Cymatics to bring the immense power of Sony’s speaker technology to life.

Our objective was to give the audience a sensory experience like no other; one that reflects the sensations felt when being in the same room as these products.

The results are incredible: geometric patterns formed by the vibrations of specific audio frequencies, water that precisely mimics the dynamic range of vocals, and ferrofluid that dances and evolves into spectacular formations due to electro magnets triggered by base notes.”

The Sony’s MHC-V7D is designed to convert your home into an epic dance floor— this new High Powered Audio system aims to create the best possible sound quality and volume levels to give you the electric feeling of dancing the night away with your friends in a world-class nightclub.

The MHC-V7D delivers soul shaking bass, with 1550W[1] of sound pressure (RMS 1440W, 105.5dB SPL) thanks to Sony’s new Smart High Power Technology,designed to increase acoustic pressure. Featuring Sony’s Clear Audio+™ technology to optimise sound settings with one single touch as well as a Football mode that enhances the atmosphere of sporting events, the MHC-V7D provides ideal, occasion specific sound, whether you are hosting a party, watching the game, or having a chilled night in.

Enhance your favourite tracks with easily controllable DJ and Sampler sound effects, such as audience cheers and reggae horns or add your own voice to your favourite songs with two Microphone inputs for Karaoke. The bass bumping MHC-V7D also allows you to elevate the atmosphere on your dance floor further by projecting light patterns around the room, thanks to integrated, adjustable space illuminating party lights that synchronise with the beat of the music.

The MHC-V7D’s new Gesture Control Technology lets you effortlessly transcend the world of DJs as you control both the music and lighting at your party effortlessly with the flick of your hand.

Connect your smartphone, tablet or laptop to the speaker system via NFC™ and Bluetooth® to wirelessly stream and listen to your playlists on the MHC-V7D. Stay in full control of the music and lights, add DJ-Effects and voice playback even while mingling with your friends using Sony’s new Fiestable app. Simply download the App from the Google Play™ or App Storeand connect the MHC-V7D to your smart device, which will then act as a remote control.

This true DJ-experience is packed into a space saving one-box design. Should you however feel the need to truly wake up the neighbours you can use Party Chain Mode to hook-up and sync the MHC-V7D to other compatible High Powered Audio Systems such as the SHAKE-X3D or SHAKE-X1D.

device and information technology products for the consumer and professional markets.

With its music, pictures, computer entertainment and online businesses, Sony is uniquely positioned to be the leading electronics and entertainment company in the world. Sony recorded consolidated annual sales of approximately $68 billion for the fiscal year ended March 31, 2015. 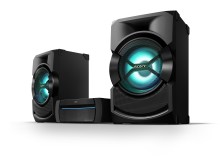 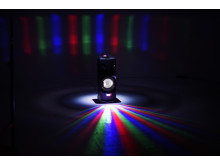 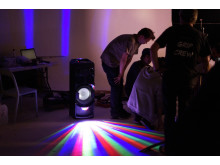 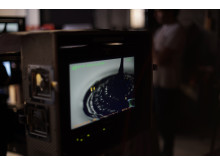 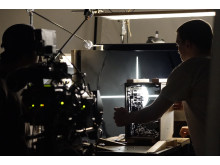 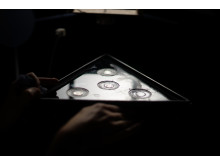 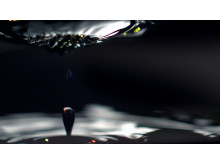 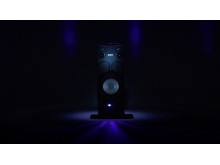 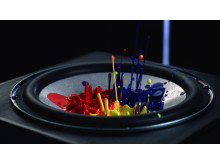 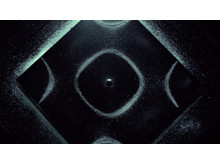 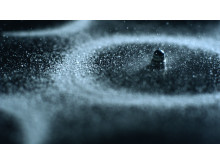 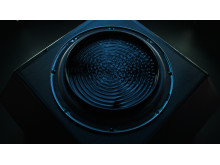