IFA Berlin, 28th August 2008 - Sony has re-emerged with an overwhelming digital experience and stunning product news at IFA 2008. Sony today unveiled its IFA highlights and finally demystified its teaser campaign “All becomes clear 28.08.2008”, which were on oversize billboards across the German capital starting August 1. It invited consumers to be curious about the number ‘200’, which marks the debut of world’s first Motionflow 200Hz BRAVIA TV. The campaign alluded to the creative concept of the Sony booth, which boasts giant trees and themed exhibition areas featuring the latest Sony products and entertainment content on a total floor space of 6,000m². The ‘enchanted forest’ concept symbolises a forest canopy embracing every product, every technology, every piece of entertainment content on display, reflecting and exemplifying the ‘Sony United’ philosophy in every aspect. The series of tree clusters invites consumers to explore, to be curious and to be interactive.

During its press conference, Sony reiterated its goal to achieve the No. 1 position in LCD TVs globally - and in Europe - by 2010 and underlined its determination by announcing three world firsts for BRAVIA technology and a European first with the introduction of the OLED (Organic Light Emitting Diode) TV XEL-1.

One of the most stunning IFA highlights is certainly the world's thinnest LCD TV. The Edge LED Technology of the BRAVIA ZX1 enables a stunningly slim 9.9mm2 screen1. The BRAVIA ZX1 combines an uncompromising style with superlative BRAVIA picture quality. It offers the ultimate in visual appeal with a 40-inch screen, measuring a barely believable 9.9mm deep at its slimmest section. With BRAVIA Engine 2, Motionflow 100Hz and High Definition wireless technology for cable-free elegance, the BRAVIA ZX1 is the perfect balance of high aesthetics and high technology.

The world's thinnest TV is complemented by the world's first Motionflow 200Hz BRAVIA - the BRAVIA Z4500. The Z4500 lets you experience the best-ever Full HD motion clarity. Using sophisticated algorithms to create new frames from the originals, the Z4500 Motionflow sends 200 frames a second across the screen, providing the smoothest and crispest motion reproduction to be achieved by an LCD TV.

With the XEL-1, Sony is proud to be the first to bring OLED (Organic Light Emitting Diode) TV technology to the European market. The XEL-1 embodies all the advantages offered by OLED, which centre around the superlative image quality that the self-illuminating screen can deliver. With a daringly slim 3mm screen and a contrast ratio of more than 1 million to 1, it represents the pinnacle of Sony’s excellence in TV technology.

In addition to these world firsts in the TV category, Sony introduced a wide range of new and elegantly designed products to enhance the modern consumer lifestyle. With the slim, stylish new Sony Cybershot™ DSC-T500, its easy to capture your favourite moments as sumptuous stills or HD movie clips. Available in a choice of eye-catching piano black, silver and red finishes, the chic T500 is packed with Sony technology to help everyone take better-looking pictures. Alongside sparkling 10.1 effective megapixel still image quality, it’s the first Cyber-shot™ that can capture crisp, clear HD movie clips with stereo sound.

This season’s colourful new WALKMAN® range from Sony is everything you want from an MP3 player. Bursting with cutting-edge technology, new S series WALKMAN® video MP3 players let you enjoy your personal media collection with unrivalled quality and convenience. Just 7.5 mm thin, this super-light S series is the slimmest WALKMAN® ever.

Your entry to the exciting world of WALKMAN® sound quality is more affordble than ever. Available in a choice of four fashion colours, the ultra-portable B Series connects directly to your PC’s USB port for fuss-free drag & drop file transfers. Like all other WALKMAN® models, open support for a wide range of popular formats means you’re free to buy, copy and manage your music wherever and however you want.

The next-generation Blu-ray Disc players BDPS350 and BDP-S550 are brimming with advanced features not found on conventional DVD players. They are a must for HDTV owners since they are capable of the ultimate in High Definition: 1080p Full HD. They also feature Precision Cinema HD Upscale, which can increase the resolution of standard DVDs (480i) to 1080p, so existing movie collections will also look outstanding on an HDTV.

Sony's new High-End Blu-ray Player BDPS5000ES is engineered to meet the most exacting requirements of the serious Home Theatre devotee and will push the High Definition experience to the limit. The player combines outstandingly clear and vivid picture quality with the very best audio.

The BRAVIA Theatre BDV-IT1000 is the perfect solution for HD home cinema entertainment. The new system provides state of the art Blu-ray Disc home theatre with new High-Definition audio codecs. In Japan, there’s a popular snack called ‘Pocky’ – a very thin, chocolate-dipped pretzel stick. And ‘Pocky’ is the code-name Sony used during the development of the brand-new BRAVIA™ Theatre BDV-IT1000 Blu-ray Disc™ home cinema system. Why? It’s simple: the speakers used in the system look just as slim as the snack!

You’ve never seen a loudspeaker quite like Sony’s new NSA-PF1 – the Sountina. Nor will you ever have heard anything like it: this single, elegant column, combining glass, leather and roomenhancing illumination, delivers music over 360º, providing a sonic and visual focal-point for any room. A revolutionary single tubular column delivering the
same crystal clear sound wherever you are in the room.

And finally, for the icing on the cake, Sony has announced that Rolly (SEP-30BT) will be available in selected European outlets this October. Rolly is Sony’s unique palm-sized music entertainment player which spins and dances to the rhythm of music. Fusing Sony’s innovations in artificial intelligence and portable audio technology, Rolly combines superb sound quality with motion capabilities, providing a truly unique entertainment experience.

1 At its slimmest part 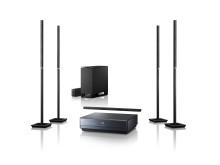 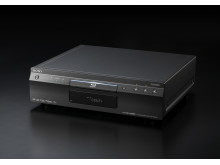 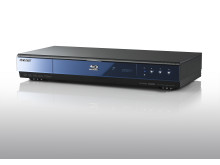 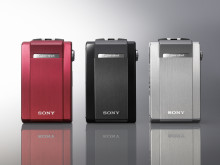 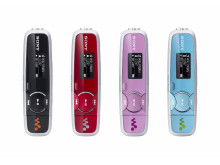 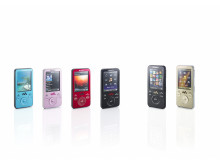 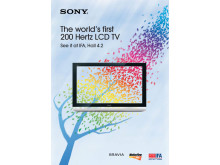 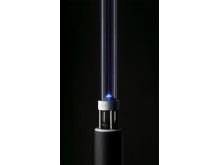 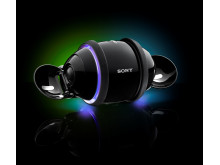 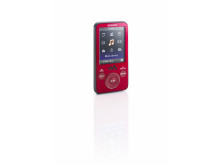 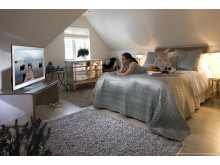 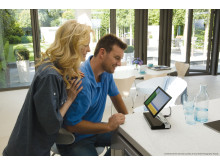