LAS VEGAS, January 4th, 2017 (CES, Booth #17300) – Sony today announced the expansion of its ultra short throw home theatre line up with the introduction of the VPL-VZ1000ES 4K HDR home theatre projector, designed to integrate easily into people’s homes. Sony’s latest innovative laser light source projector is High Dynamic Range (HDR) compatible with native 4K resolution. It can be positioned as little as six inches away from the wall, yet command the room with a 254 cm (100 inch) image, measured diagonally in 16:9. When powered off, the compact and elegant VPL-VZ1000ES virtually disappears into the décor. It is now possible to have an immersive viewing experience for a wide range of residential applications, from a home theatre to a living room or bedroom, no matter what the design or layout of your home is.

"Up until now home cinema enthusiasts have needed a dedicated room for watching projected content; this isn't always ideal, since not everyone has the luxury of extra space to accommodate an extra-large screen. The new VPL-VZ1000ES changes this dynamic completely, providing an enchanting home theatre experience up to 120" in your existing living space," said Thomas Issa, Product Manager at Sony Professional Solutions Europe. "Our revolutionary new generation of ultra short throw projectors deliver incredible 4K HDR imagery just inches away from your wall, then fade into the existing room design once turned off."

Unlock the walls of your imagination

The unique form factor of the VPL-VZ1000ES opens up a whole new set of usage scenarios. It is the ideal projector for large display sizes in small spaces, as well as locations with high ceilings. And since the projector is mounted in front rather than behind the viewers, there are no issues with shadows or obstructions from ceiling lights or fans. You can turn any wall into a life-sized window to another world. And for modern houses and apartments with large windows and limited wall space, a drop down screen in front of the window enables great viewing of TV, movies and sports. When the show is over, raise the screen, and once again enjoy your view.

Sony's breakthrough new projector allows consumers to have a huge screen in their living room with a simple elegant installation available for the home. This makes the VPL-VZ1000ES unlike anything consumers have ever experienced before in home cinema viewing and ultra short throw projection.

The VPL-VZ1000ES ultra short throw 4K HDR home theatre projector will be available from April 2017. Sony is exhibiting at the CES Sony Booth #7300 in Las Vegas from January 5th to 8th. 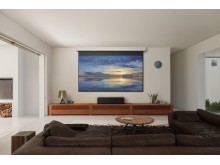