Bompas & Parr has worked with Sony to create a ‘musical garden’ – using plants and leaves as capacitive touch sensors – at the slight human touch, sonic tones are triggered and music played.

The amount of electricity escaping from the plant is recorded and used to adjust volume and pitch, and generate new sonic tones through custom software and emerged out of Sony’s SRS-X88 wireless speaker.

Sam Bompas explains, “Any organic matter can conduct electricity and by carefully measuring the amount of electricity passing through a surface, the circuit detects how someone is holding something, tapping gently or holding tightly.”

The quirky sound based experiment was exhibited at the Sony’s Multi-Room Sonic Wonderland in partnership with culinary designers Bompas & Parr. The space explored the effect of sound on the public and how, through a series of sonic experiments, senses can be mixed to create new experiences.

To see this in action: http://we.tl/LN9wnCVL5M

Sony has recently launched its Multi-room audio technology, which means you can create the right environment by listening to the right music, anywhere and at any time – connect compatible devices and enjoy multi-room music in any room of the house.

Sony has a broad offering of Multi-room connecting products and options. From its sleek wireless speaker range, the SRS-X77, SRS-X88 and SRS-X99 to its AV Receivers STR-DN860 and STR-DN1080, to the Soundbars HT-NT3 and HT-ST9, Hi-Fi System CMT-SX7 and SoundBase HT-XT3, Sony range offers the perfect sound system for everyone and every situation. Music can be easily streamed onto devices via Google Cast or other supported services via Bluetooth /NFC One Touch.

Bompas & Parr leads in flavour-based experience design, culinary research, architectural installations and contemporary food design. Founded by Sam Bompas and Harry Parr in 2007, the early work of the studio used jelly as a vehicle to research the crossmodal correspondences of the senses and the relationship between food and architecture. The studio first came to prominence through its expertise in jelly making, but has since gone on to create immersive flavour based experiences ranging from an inhabitable cloud of gin and tonic, a chocolate climbing wall and a Taste Experience for the Guinness Storehouse in Dublin, officially the best place to taste Guinness in the world.

About the Sony Multi-Room products used in this experience

For more detail about all the Sony Multi-Room products listed and in the experiment, please see the Sony press centre: http://presscentre.sony.co.uk/pressreleases/bring-your-music-together-at-home-with-sony-multi-room-1141546 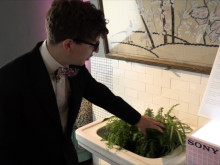