The Forest Guard team were winners of the Climate Actions contest at the Children’s Climate Call competition held 1st – 3rd May in Copenhagen, Denmark. More than 700 children took part in this Open European Championship of the FIRST LEGO League tournament, organized by the not-for-profit public charity FIRST™ (For Inspiration and Recognition of Science and Technology) and the LEGO Group, which this year attracted over 140,000 children and teenagers from more than 40 countries.

Sony was a partner with the Climate Actions contest and was so impressed by ‘Forest Guard’ it is now fully backing the team’s idea, nurturing their development of the project, with guidance from Sony’s top engineering team and Sony technology helping them make their idea into a working prototype.

The team behind the innovative ‘Forest Guard’ idea are from Northern California where forest fires are rife and they are keen to highlight that the carbon dioxide emitted during these fires can equal that produced by several million cars on the road in a year. They have travelled over to Europe to present their impressive wildfire detection solution using a network of solar-powered CCTV cameras and citizen fire watchers over the web to obtain advance warning of these fires before they manage to spread and cause a devastating impact.

Morgan David, Divisional Director, Research and Development (R&D) at Sony will lead the team of engineers that will work with the team to develop the ‘Forest Guard’ technology: “We were really impressed by this innovative idea and feel we are in the perfect position to bring our knowledge of technology and engineering to the project and help them make it into a reality. To help solve problems to climate change through technology is at the heart of Sony’s philosophy”.

The team will begin their work with Sony by attending a workshop at the Sony Professional headquarters in Basingstoke in the UK and will then work with them over the forthcoming months to help them develop a prototype.

A delighted Heidi Buck, coach of the Forest Guard team, commented, “The fact that this little idea, hatched in a small room in the foothills of our home town in California, is going to be made real with Sony is unbelievable, it still hasn’t sunk in yet! It’s a bit like a fairy tale for all of us. It has been an amazing journey to come to Copenhagen and win this prize, the team have done a fantastic job and now we close that door and start the next part of the journey!” 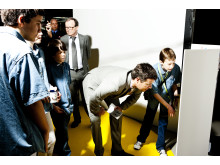 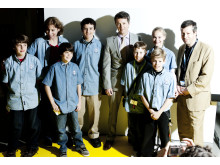