Sony Europe today announced it will partner with Climate Actions, part of the Children’s Climate Call competition in Copenhagen, Denmark organised by the LEGO Group and FIRST Scandinavia.

Running from May 1-3, 2009 the tournament will see 700 children and teenagers from more than 40 countries take part. The youngsters are all winners of the numerous national and regional FIRST LEGO® League tournaments, which, since September 2008, have engaged 140,000 participants in tackling climate challenges.

As part of the competition, teams were asked to explore solutions to climate challenges, and over the weekend six nominated Climate Actions teams will work with experts, including a team of Sony engineers, to produce an implementation plan for their research projects.

“We’re really excited to be working with the teams at the competition because using technology to help solve problems to climate change is at the heart of Sony’s philosophy to safeguard the world for the next generation”, commented Morgan David, Divisional Director of Research and Development at Sony. “It’s even more fitting that we can enable and empower the younger generation to reconnect to their global environment and give them a voice in the issues affecting it.”

To help the teams document and present their ideas in the best possible way at the end of the weekend, Sony will run film workshops so they can utilise digital technology to show how their ideas will work. They will then own these videos to demonstrate their ideas through other channels if they wish, such as on social networking sites.

Climate Actions will be at the Children’s Climate Call event, which will take place at the Bella Center, centrally located in the Danish capital. The event will be open to the public with free entry on May 2 and 3 from 10:00–15:30. Sunday morning, Denmark’s Crown Prince Frederik will visit Children’s Climate Call. 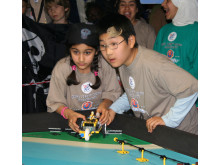