BBC Radio 5 live presenter Robbie Savage has walked away with this year’s Sony DAB Rising Star Award at the 29th annual Sony Radio Academy Awards, in one of the most hotly contested categories of the night.

The recently retired Derby County captain proved his talents extend off the field as co-host on the popular football phone-in show ‘606’ on BBC Radio 5 live, beating the likes of Rolling Stones rock and roll legend Ronnie Wood to cement his position as a leading UK radio host.

Robbie rallied the support of his listeners and his fans on Twitter to receive thousands of votes - the most ever received by a nominee in the Sony DAB Rising Star Award history.

The UK’s most prestigious industry radio honours took place at London’s Grosvenor House Hotel on Monday 9th May. Robbie beat four other nominees to win the award, which was presented to him by the iconic Geri Halliwell. The Sony DAB Rising Star Award is the night’s only people’s choice award and continues to grow in popularity each year, with more people voting for their favourite new radio hosts in 2011 than ever before.

Robbie has co-hosted the ‘606’ football show since January last year, the show predominantly a football phone in with its listeners, where Savage’s outspoken views entertain even the non-football fans. The judging panel shortlisted Robbie Savage for his ability to engage and humour his audience with his brave and original voice, his controversial yet entertaining comments building him a strong listenership in his first year on air.

This year’s diverse mix of nominees were shortlisted by a panel of industry experts – all the ‘Rising Stars’ have been on air for less than 18 months. In addition to Absolute Radio’s Ronnie Wood, nominees included entertainment reporter Matt Edmondson from BBC Radio 1, talented radio journalist Simon Conway from Metro Radio (Newcastle) and Sarah Thompson from Roundhouse Radio for her alternative Filthy Disco show.

Adrian Northover-Smith, Head of Internal Communications and Corporate Public Affairs Sony UK, said: “This year’s Sony DAB Rising Star Award nominees are a celebration of the diversity of new talent on the radio from comedic journalists to footballers and rock stars, all nominees have made their mark by entertaining listeners with smart and engaging content. We’d like to congratulate Robbie Savage on winning the Sony DAB Rising Star Award this year. His fearless approach to radio has certainly won over the public and we wish him the best of luck as he builds his radio career.”

Interviews are potentially available with this year’s winner, Robbie Savage and all nominees. 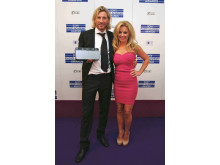