New research by Sony has found that our growing passion for gaming is even having an effect on house prices, with the games room a key feature for house buyers, particularly in London. The research was commissioned to celebrate the launch of the PlayStation™Now (PS Now) open beta on Sony BRAVIA® TVs, which became available this July – effectively making any room a games room.

With gaming on the rise, just under half (46%) of UK adults are now playing video games, putting the games room firmly into the top ten desired features of a new home if money were no object. And while it isn’t as popular as a garden (74%), en-suite bathroom (74%) or a guest bedroom (71%), a games room is now desired by four in ten of us (40%), or 20,900,000 UK adults[1], meaning out with the old and in with the new as it has become one of 2015’s must haves and is now more popular than having our own library, bar or the traditional wine cellar (24%). Almost nine out of 10 gamers would like to have a separate space for gaming.

When asked what they would most want to use an additional spare room for, more UK adults opted for a games room than a walk-in wardrobe (11% versus 9%).

So why don’t more of us have a games room?

Despite the average UK household now containing 2.4 TVs, many people don’t have a spare room (39%). Gamers still mainly play in their living room (63%) or bedroom (30%). PS Now for Sony BRAVIA means that any compatible TV in your house will be able to play a broad range of PlayStation®3 (PS3™) titles, without the need for a console, effectively making any room a games room. With just a DUALSHOCK®4 or DUALSHOCK®3 Wireless Controller, gamers in the UK will be able to play some of the best PS3™ games without having to make extra space.

Ex-football legend Robbie Fowler says that with space at a premium, creating room for gaming is difficult for most house buyers. Fowler owns many properties and thinks this research shows that adding a feature such as a games room would help you sell or rent your house for more. “When I’m letting flats or houses, one of the key things I have to consider is ‘what stands this property apart?’. It’s amazing how many people play games now, it seems to have replaced other entertainment in the house, which means that having an extra space designed for gaming would be hugely attractive to a large proportion of the population. It’s understandable that the main reason people don’t have a console is because of space constraints, and PS Now is a great solution for people without necessarily requiring space for consoles in different rooms, I think. You can effectively make any room with a PS Now compatible BRAVIA TV into a games room, saving that extra space for other uses. Imagine if you mounted your BRAVIA to the wall and used the room as a spare bedroom. You effectively create extra space and an additional feature, and yet can still use it as a games room with PS Now.”

London is the Gaming Capital of the UK

Londoners and Digital Natives lead the way in gaming with over half of Londoners being gamers (54%) and a staggering three quarters of 18-34 year olds. With this in mind, it’s perhaps not surprising that—even with space at a premium in the capital—one in ten Londoners is currently using a spare room as a games room, while almost one in ten (9%) of 18-34 year olds are doing the same. If we look at those who have access to a spare room, then these figures are even starker:

Motoi Kawamura, Head of TV Marketing and Product Planning for Sony Europe explains: “It’s amazing that so many people want a space to play video games in their home. With PS Now available on our BRAVIA TVs, gamers now have the gaming potential of PlayStation® without having to buy or find space for a console. Whether you play in a dedicated games room, or just in your lounge or bedroom, PS Now on Sony BRAVIA gives customers more choice and flexibility in how they play games in their home.”

Sony BRAVIA with PS Now is currently available on new Sony BRAVIA 4K Ultra HD TVs including the KD-43X8305C, KD-43X8307C, KD-43X8309C and the KD-49X8305C[3]. These new televisions come with the powerful 4K Processor X1 which brings stunning picture quality to whatever you're watching. Every source is intelligently analysed and upscaled to its best 4K resolution, from TV broadcasts, Blu-ray Discs and DVDs, to 4K internet videos. Enjoy incredible 4K images with stunning clarity, more lifelike colours and sparkling contrast and with ClearAudio+ the TV fine-tunes sound for an immersive, emotionally enriching experience that seems to surround you.

PS Now is also available on 2K W Series, selected 2014 BRAVIA models and Blu-ray players, as well as PlayStation®4 (PS4™) and PlayStation®3 (PS3™) consoles and PlayStation™TV. PS Now delivers blockbuster and critically acclaimed PS3 games streamed via the cloud, giving more people the opportunity to experience the world of PlayStation. During the open beta, available in the UK, games are available for rental for periods of either 48 hours or 30 days. 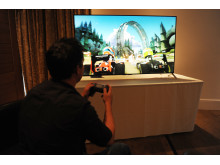