Located at the Centre Court shopping centre in Wimbledon, the 128-square metre Sony Centre is the first of its kind in the UK and adopts the new global retail format, using experiential play tables so that customers can personally interact and engage with Sony’s products as they would in a home environment.

The store design incorporates a bright pallet of colours and features world class architecture and design, making it a unique and inspiring destination in which customers can experience Sony in a fun, vibrant, innovative and engaging environment.

"Sony's goal is always to exceed customer expectations and feedback from them tells us that they want to be excited by an interactive and entertaining shopping experience," said Roy Dickens, Retail Director for Sony UK. "Our new store concept gives shoppers an opportunity to engage with trained and knowledgeable staff as they play, and to experience the right Sony proposition for their needs."

Sony will be filming and broadcasting the Wimbledon finals this year in 3D as part of the company’s partnership with The All England Lawn Tennis Club (AELTC). This year is the first time that the AELTC/Sony production of the Men’s Singles Semi-Finals and the Ladies’ and Men’s Singles Finals will be filmed in High Definition 3D and provided to rights holders and global broadcasters seeking unique and compelling content for their 3D channels.

Martina Navratilova won the women’s singles title at Wimbledon a record 9 times, and she shared an all-time record of 20 Wimbledon titles with Billie Jean King. Commenting on the 3D viewing technology on display in the new Sony Centre, Martina said: “3D technology is evolving rapidly and I am excited to watch it evolve and improve with Sony at the forefront. You really feel you are there without actually being there and it's the best way to feel like I am there right in the heart of the action.”

The Wimbledon Sony Centre is located at Unit 202 in the Centre Court Shopping Centre. Sony plans to open four further Sony Centres with this store format in 2011.

Customers visiting the Wimbledon Sony Centre between 21st and 26th June will be entered into a prize draw to win one of two pairs of tickets for Wimbledon’s Court number 1 on Sunday 3rd July, with full ground access and hospitality. 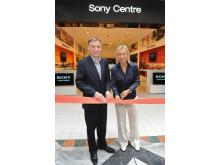