After 10 days of intense auditions on Sony's Facebook fan pages and over 6,000 entries from 16 countries, 10 lucky finalists have been selected to take part in the grand finale in LA and win the chance to make gaming history to become a playable character[i] in 'Uncharted 3: Drake's Deception™' on PlayStation®3.

This once in a lifetime experience is made possible through bringing together Sony's expertise and heritage in film and gaming. In recent hit games, including the Uncharted franchise, Sony has taken computer games to new levels of film-like reality and this audition goes one step further to find and nurture creative talent and create an opportunity that only Sony can make a reality. (See video here: https://www.facebook.com/SonyUK?sk=app_268153463259148)

Two of the ten finalists come from the UK:

The final event takes place on 28th March at the Sony Pictures studios in Culver City where the finalists will meet their heroes from the game, including Nolan North who plays the infamous Nathan Drake, to receive hands on coaching for their final audition.

The auditions will put each finalist's skill and talent to the test and will see them compete against each other in a series of gaming challenges, go through their action-man paces with legendary stunt experts, improve their acting and improvisation skills and endeavour to impress the team of judges with their character creations.

The Naughty Doc Inc. judging panel commented, "The amount of creativity and enthusiasm we saw from our contestants during The Uncharted Audition was great. Sony challenged fans to prove that they were as good as Nathan Drake and our finalists achieved this by demonstrating the highest level of quality and imagination possible. This is how we work at Naughty Dog and it’s what make.believe is all about. We’re excited to see what kind of wildly creative Uncharted 3 multiplayer character our grand prize winner will help us design.”

Finalists will also receive a digital camera from Sony to document their amazing journey to become a playable game character. A final winner's video will be created to show gaming history being made!

Product images are available from http://presscentre.sony.co.uk


[i] a multi-player character available in the pack update 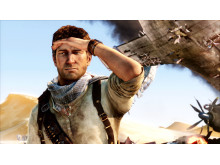