The 2012 version of the Sony flagship HX8 television will be available in store on the 10th May. The HX8 has been designed to deliver against what really matters when it comes to TVs; providing top class entertainment shown with outstanding picture quality.

Non-stop Entertainment is provided through the Sony Entertainment Network allowing you to catch up on TV programmes you've missed with BBC iPlayer or the latest blockbusters from Video Unlimited. New for 2012 is the inclusion of Netflix so you can watch whole seasons of your favourite TV series. This is all packaged in a new user interface, accessed through the press of the dedicated “SEN” button on the remote control.

If you’ve got the best entertainment available then you’re going to want to watch it in the best possible quality. The HX8 offers fantastic detail, colour and movement control to give a stunning real-life picture.

Details are made pin-sharp through the Sony X-reality Pro technology, which cleverly compares the scene on the screen with a built-in database of images to replicate minute details such as texture, allowing you to see everything exactly as the cameraman witnessed it. The X-reality Pro technology is now even applied to 3D giving more depth and detail then ever before.

What’s more, the X-Reality processor adjusts the picture to give real-life colours by then by analysing each scene intelligently. However, it’s the HX8’s performance on dimming lit scenes that really mark it out from the crowd. A sophisticated method of backlighting utilising LEDs on both sides of the screen that adjust in small clusters gives much greater control over which parts of the screen are dark or light. So you'll never miss the detail in that dimly lit scene.

It’s also designed to handle fast paced action like a tennis match, or a sweeping shot as the camera pans from right to left or a 3D movie as it employs a 200hz native panel, complementing this with Sony’s motionflow technology. This allows the TV to move between frames at the maximum possible speed, delivering smooth blur free imagery.

The HX8 is not only designed to deliver the best possible picture quality. It’s also been crafted to accentuate the look of your living room. Made from a single sheet of jet-black gorilla glass, sitting on an elegant chrome stand the HX8 looks as stunning off as it does on. This chrome stand actually doubles as a sound bar to improve the sound and really bring what you’re watching to life.

It may seem hard to believe but a TV that excels in so many ways can actually save you money. The Energy Saving Trust has recognised the efficiency of Sony televisions and concluded that choosing an Energy Saving Trust Recommended Sony television over a similarly sized new Plasma Screen TV can not only save you money, but can also reduce your household’s carbon footprint.

*Savings assume TVs have a lifetime of 7.5 years and are calculated using the average electricity tariff of 14.39p / kWh.

The HX7 and EX6 and EX5 models will join the new HX8 BRAVIA in store. This core range of 2012 Sony TVs will all offer non-stop entertainment through the Sony Entertainment Network accessing this content through the Internet via wifi. They are all energy saving LED, offer high definition picture via Freeview HD and the ability to improve detail and colour through the X-reality processor. The HX7 also incorporates Full HD 3D technology.

Sony Product Marketing Manager Chris Trewhitt commented: “The 2012 range of TVs from Sony focuses on what really matters when to comes to TVs. That is offering the best entertainment available and allowing them to watch it in the best possible picture quality. The new 2012 HX8 perfects those two fundamental core requirements of a TV and complements them with improved sound and a stunning design.“

*Movies with some DRM will not be supported with this function 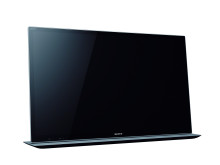