Enhancing Sony's unique user experience, Chairman, CEO and President of Sony Corporation, Sir Howard Stringer, announced what's next for 3D; “We are going to build on our leadership in 3D – across the board. And keep in mind that no one has done more than Sony to introduce the world to 3D in every dimension.”

In April of this year, the establishment of Consumer Products and Services Group (CPSG) brought together Sony's entire portfolio of consumer products and network services under a single unified team for the very first time. Kazuo Hirai, Executive Deputy President, Sony Corporation, unveiled the incarnation of this convergence of hardware, content and network - the Sony Tablet S and P - commenting "In pursuit of realising a truly converged experience, we have accelerated the integration of hardware, content and network, and this 'uniquely Sony' proposition is embodied in our new Sony Tablet launched today at IFA."

Sony's aim is to create a network that brings its devices and content together in a way that is both simple to use and beautiful to behold. Therefore, in harmony with the new Sony Tablet, Kazuo Hirai also unveiled that the “Qriocity” network platform, offering video and music services, will be realigned with “Sony Entertainment Network,” which is the next step towards the goal of realising a single, global, comprehensive platform of all network services, which will be accessible from one convenient account.

“Through ‘Sony Entertainment Network,’ we can provide everything that Sony customers value – and want – in a convenient, comprehensive manner that is uniquely Sony in its presentation and delivery,” said Kazuo Hirai.

A trip to this year's booth will take you on a thrilling journey of a true 'uniquely Sony' connected experience. Whether it be ‘Music’, ‘Movies’, ‘Games’ or ‘Memories’, Sony has captured the essence of creating, viewing, sharing and enjoying this entertainment in four amazing interactive experience areas.

- Xperia Arc S - the fastest and most entertaining Xperia smartphone to date, built on the award-winning Xperia Arc

iii Existing model which is only available in US

[iv] Among interchangeable-lens digital cameras with APS-C size sensor as of August 24, 2011

[v] Existing model which is only available in US 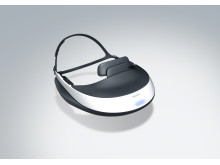