Sony will be making it easier than ever to catch up on your favourite TV shows with the inclusion of YouView to its range of 2015 BRAVIA TVs. In partnership with YouView it will be the first manufacturer in the UK and Ireland to include the on demand TV service.

From Summer 2015, UK consumers will have the ability to watch their favourite TV shows from BBC iPlayer, 4oD, ITV Player and Demand 5 as well as live TV using the intuitive YouView interface with no need for a separate set-top box.

With twelve 4K Ultra HD TVs in the new Sony series, there’s a lot to get excited about. Eye-catching design and breath-taking picture quality provide a best in class home entertainment experience. Whilst the inclusion of YouView combined with Android TV™ and Sony’s One-Flick Entertainment offers an effortless Smart TV user experience with access to a wide range of content, from demand services, movies, music, photos, games, apps and more.

Sony customers will now have access to YouView’s library of more than 12,000 titles of on demand TV programmes. Discover will list TV programmes so you can see at a glance what has recently been added and which programmes are the most popular or simply browse by genre. Search seamlessly integrates live and on demand TV giving customers the option to type in a programme name to instantly find favourite TV shows.

The seven day scroll back guide offers an easy way to find catch up TV from across BBC iPlayer, ITV Player, 4oD and Demand 5. Sony customers will now be able to simply scroll back through the iconic YouView guide and choose from a great selection of on demand TV programmes.

John Anderson, Sony UK and Ireland country head said: “The way we watch TV is changing, with more demand than ever for a large range of content, when we want it, how we want it. We’re delighted to be the first manufacturer in the UK to announce the addition of YouView to our range of TVs. We believe that our new BRAVIA range now has an unparalleled combination of Sony’s fantastic picture quality, fantastic design and the widest choice of content ever complete with Sony High Resolution Audio.”

Richard Halton, CEO, YouView said, “We are thrilled to announce a major collaboration with Sony on our first ever project to make YouView available on TVs. This exciting YouView and Sony partnership will create a deep integration of YouView’s functionality within the new Sony TV range, built on the Android platform. It will offer everything you’d expect from YouView including our iconic seamless and easy to use TV guide, giving customers simple access to the live and catch up TV they love.”

YouView is an on demand TV service with over 70 live free-to-air digital TV and radio channels. It seamlessly combines seven day catch-up on BBC iPlayer, ITV Player, 4oD and Demand 5 with a library of on demand television programmes and films.

YouView set-top boxes are offered as part of broadband subscription bundles from TalkTalk and BT. It is also available to buy subscription-free from all major retailers and many independent electrical stores including John Lewis, Currys, Argos, Tesco, Amazon and Richer Sounds.

From summer 2015, YouView will launch its first ever TV project with Sony offering catch up TV from BBC iPlayer, ITV Player, 4oD and Demand 5.

Like what you see and want to work for YouView? Visit our jobs page at youview.com/jobs and Linkedin. 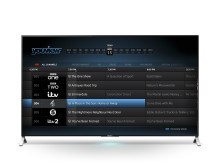