Sony is delighted to announce its sponsorship of the star-studded World Book Night launch event in Trafalgar Square, London, on Friday 4th March 2011, in association with Reader™, its dedicated digital reading device. In the spirit of promoting great books, and reading as an activity, Sony will also host ‘A Good eRead’, a live ‘virtual book club’ discussion on Twitter, on Thursday 3rd March.

World Book Night is therefore hosting the largest book giveaway ever attempted in the UK. One million copies of 25 specially selected titles will be distributed to members of the UK and Irish public on Saturday 5th March.

The launch event on 4th March will be compèred by Graham Norton and will feature performances by World Book Night patrons including John Le Carré, Rupert Everett, Alan Bennett and Nick Cave. It aims to bring some of those selected books to life for the audience of 25,000 members of the public who have volunteered to take part in the ‘great book giveaway’ on the following day.

Sony will have a stand to welcome attendees with both a free hot beverage and hands-on demos of the Reader Pocket and Touch Editions, featuring key World Book Night titles pre-loaded for the event.

In the run-up to the event, and to support the celebration, Margaret Atwood fans and all book lovers are invited to participate in a real time discussion forum. Taking place from 19.00 – 21.00 GMT on 3rd March 2011, Sony will host ‘A Good eRead’, a live ‘virtual book club’ discussion on Twitter.

To take part, book fans are invited to follow @WorldBookNight on Twitter to receive live updates and add views and opinions on The Blind Assassin, the bestselling novel that won its Canadian author, Margaret Atwood (@MargaretAtwood), the Booker Prize in 2000. Passionate readers wishing to take part in the discussion can post their tweets to @WorldBookNight, and use the #agooderead hashtag throughout the session.

Of the ‘A Good eRead’ initiative, Margaret Atwood said: “Having an informed debate about a book you’ve read is one of the great pleasures of reading. Hosting just such a debate on Twitter is a new way of getting many dedicated readers to share their thoughts about a book, and I’ll be very excited to see what people tweet about The Blind Assassin.”

So join the discussion, celebrate World Book Night and share your thoughts in “a good eRead” forum with Reader™ by Sony. 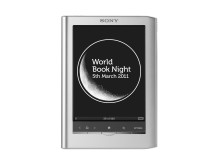