Black Friday traditionally marks the start of the Christmas shopping season in the US and is loved by many companies as it sees them move into the black and start earning a profit – hence the name. Many retailers slash their prices and consumers queue up early in search of the ultimate pre-Christmas bargain.

This year’s Black Friday, which was on November 28th, saw sales of Blu-ray players go up a staggering 147 per cent, with Sony’s critically acclaimed and award winning BDP-S350 Blu-ray player making it to No.3 in the list of best selling products across America on one of the busiest days of the year*.

The BDP-S350 was announced in Europe in August and is one of Sony’s flagship Blu-ray players. It provides the complete Blu-ray High Definition experience for customers looking to get the most from their HDTV, including full BD Live capability which allows users to access a range of exciting online services. With simple HDMI connectivity to your HDTV and easy to use pop up menus on Blu-ray discs, Sony Blu-ray players are the perfect choice for family entertainment this Christmas.

Despite the global economic downturn US consumers chose to invest heavily in gadgets and other consumer electronics products, proving that home entertainment offers a cost-effective investment for many during times of economic uncertainty. Most people prefer products that enhance their at home time, with a ‘night-in’ deemed more economical than a night out.

“The success of Blu-ray on this year’s Black Friday shows that consumers really want to get the best out of their HDTVs” said David Walstra, Director, Home Video Marketing of Sony Europe. “Blu-ray is a must for every HDTV owner because it delivers the best possible 1080p high-definition video and incredible sound quality, while unlocking next-generation features that you just won’t get from DVD, downloads or video-on-demand. Even in times of recession, none of us want to lose out on top quality entertainment.”

For more information, please download the Blu-ray Disc Newsletter which you will find on the right hand side. 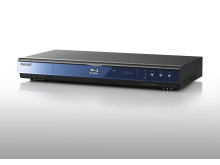